(CNN) FW de Klerk, the last leader of apartheid-era South Africa who shared a Nobel Peace Prize with Nelson Mandela after working to end racial segregation in the country, has died at 85, his foundation said on Thursday.

De Klerk released Mandela, his subsequent successor, from prison and laboriously negotiated a transition to democracy, ending a decades-long segregationist system that kept South Africa’s White minority in power over the Black majority for generations.
The two men shared the peace prize in 1993 for their work to end the policy.
De Klerk died at his home in Fresnaye from mesothelioma cancer, the FW de Klerk Foundation said Thursday.
A deeply conservative politician whose party had long supported apartheid, de Klerk became an unlikely agent of change in South Africa during his five-year rule of the country.
Recognizing the impending possibility of civil war amid worsening racial tensions, he surprised his political clan by freeing Mandela and legalizing the African National Congress. In 1993, de Klerk and other leaders ratified a new constitution that formally ended decades of racial segregation in South Africa.
He described himself as a “convert” in an interview with CNN in 2012. “The goal was separate but equal, but separate but equal failed,” he added. “We should have gone much earlier with the flow when the winds of change blew across Africa.” 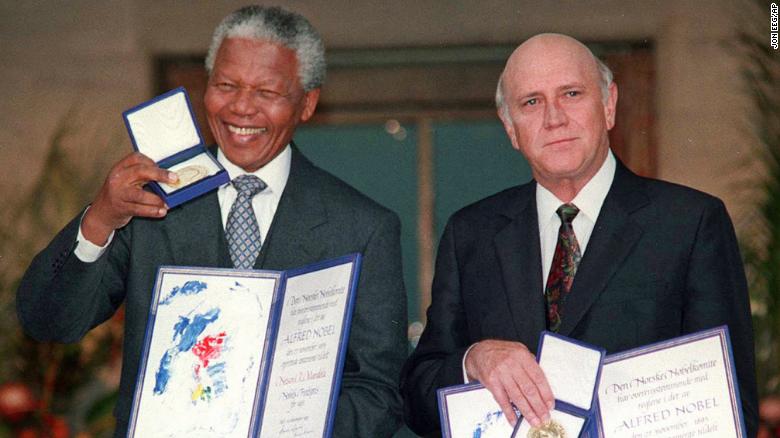 De Klerk and Mandela shared the Nobel Peace Prize in 1993.
De Klerk lost South Africa’s first multiracial, fully democratic election to Mandela, before taking a post in the new government.
But after retiring from politics he made a number of conflicting comments about the era he helped bring to an end, and his legacy as a Nobel laureate at times proved controversial.
In the same 2012 interview, de Klerk caused anger by equivocating on whether apartheid was a morally repugnant policy. “I can only say that in a qualified way … there were many aspects which are morally indefensible,” he said.
Last year, his foundation issued an apology after de Klerk claimed that apartheid was not a crime against humanity during an interview with South African public broadcaster SABC.